It’s In the Bag 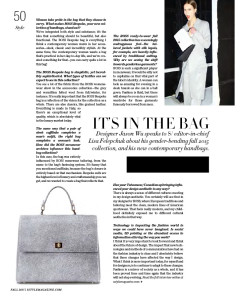 Women take pride in the bag that they choose to carry. What makes BOSS Bespoke, your new collection of handbags, so special?

We’ve integrated both style and substance; it’s the idea that something should be beautiful, but also functional. The BOSS Bespoke bag is everything I think a contemporary woman wants in her accessories—sleek, classic and incredibly stylish. At the same time, the contemporary woman wants a bag that’s practical in her day-to-day life, and we’ve created something for that—you can carry quite a lot in this bag!

The BOSS Bespoke bag is simplistic, yet incredibly sophisticated. What types of textiles can we expect to see in this collection?

You’ll see a lot of the fabric from the BOSS Womenswear show in the accessories collection – the gray and vermillion felted wool from Fall/Winter, for instance. It’s really important that the BOSS Bespoke bag is a reflection of the vision for the collection as a whole. There are also classics, like grained leather. Everything is made in Italy, so there’s an exceptional level of quality, which is absolutely vital in the luxury market today.

The same way that a pair of sleek cufflinks completes a man’s outfit, the right bag completes a woman’s look. How did the BOSS Menswear archives influence this handbag collection?

In this case, the bag was entirely influenced by BOSS menswear tailoring, from the name to the bag’s fastening system. It’s funny that you mentioned cufflinks, because the bag’s closure is entirely based on that mechanism. Bespoke suits are the highest level of luxury and craftsmanship you can get, and we wanted to create a bag that reflects that.

The BOSS ready-to-wear fall/winter 2015 collection has a seemingly androgynous feel—the tailored jackets with silk lapels, for example, are heavily influenced by traditional suiting. Why are we seeing the shift towards genderless garments?

BOSS is such a significant player in menswear; it would be silly not to capitalize on that vital part of the label’s identity. A woman can look as amazing for evening in a sleek tuxedo as she can in a ball gown. Fashion is fluid, but there will always be room in a woman’s wardrobe for those garments famously borrowed from men.

Has your Taiwanese/Canadian upbringing influenced your design aesthetic in any way?

There is always a sense of different cultures meeting in my design aesthetic. You certainly will see that in my designs for BOSS, where European traditions and tailoring meet the clean, modern lines of American sportswear. That feels really modern, and my childhood definitely exposed me to different cultural aesthetics in that way.

Technology is impacting the fashion world in ways we could have never imagined. Is social media, 3D printing or the abundant access to information altering the way you work?

I think it is very important to look forward and think about the future of design. The impact that new technologies and methods of communication have had on the fashion industry is clear and I absolutely believe that these changes have affected the way I design. What I think is more important today, for myself and for designers, is to continue to adapt to these changes. Fashion is a mirror of society as a whole, and it has been proved time and time again that the industry will not stop evolving.

Your design aesthetic is constantly evolving; the fall/winter 2015 collection is less whimsical and feminine than last fall’s collection. Where do you draw inspiration from season after season to stay current—travel, movies, people?

As a designer I draw inspiration from the places I visit and from what I see women wearing every day. It’s all about being a part of your culture, of your times, and about dressing women for their lives. New York is an especially fascinating city, and I’m inspired by it every day. It is a place where you can find inspiration in everything that crosses your path! I also get a lot of ideas from the BOSS brand and it’s DNA. I am very interested in reimagining that DNA in the eye of the cosmopolitan woman that I am designing for. That is an exciting fusion that I am always inspired by.

Did visiting the HUGO BOSS headquarters in Germany—the people, the sights, the food and culture—influence your designs?

The HUGO BOSS headquarters in Metzingen have been incredibly inspiring. It is deep in the German countryside, so there’s a beautiful marriage between the Bauhaus style architecture and the nature that surrounds it. It really encapsulates the relationship between the man-made and the natural, and that is exactly what I want my designs for BOSS to represent. Often, that’s manifested in the idea of rigorous clothes meeting femininity and softness – sometimes you will see very direct, almost literal references to that idea. For instance, for the set of my second show with BOSS, we created a “digital” forest that was inspired by the surroundings of the Metzingen Headquarters.

BOSS is a heritage brand with an unmistakable utilitarian air that is deeply rooted in its timeless silhouettes. How has access to the brand archives influenced the way you design?

BOSS is almost a century old, and many of those years didn’t include womenswear at all, so of course when delving into the BOSS archives, it’s all about menswear. This was an interesting challenge for me, translating those menswear designs into a women’s wardrobe. I’m also influenced by the BOSS ateliers operating today and how the clothes are made. They have the most incredible machines that achieve stunning effects. It’s almost like a new kind of couture, “Industrial Couture”, and it proves that there can be beauty in things that are machine-made. My own line is based on hand crafting and couture detailing, so it’s exciting to work with something so new and different. It feels forward-thinking and really modern.

Your parents played a large role in helping your realize your career as a fashion designer. What do they think of your accomplishments thus far?

They’re proud, and pleased I have a career I love, where I get to make beautiful things that make me and other people happy.

Top Watch Trends for The Season