A Tale of Two Trades

Behind the plot twists, musical scores, and “movie magic” of cinema’s greatest triumphs, is a character wearing really smart clothes. 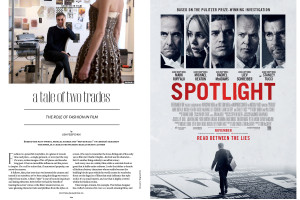 Fashion is a powerful storyteller. At a glance it reveals time and place—a single garment, or even just the way it’s worn, evokes images of far-o places and decades long past. It has an incredible in uence and the power to inspire. It’s a call to action that, if announced properly, can move the masses. It follows, then, that ever since we invented the camera and turned it on ourselves, we’ve been using the things we wear to help tell our stories. A film’s “style” is one of its most important and lasting elements. Even before we had the benefit of hearing the actors’ voices or the films’ musical scores, we were gleaning character traits and plot lines from the styles onscreen. (It’s easy to remember the loose-fitting suit of the early 1920s film 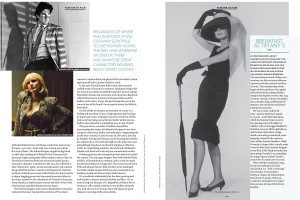 star Charlie Chaplin—his look was his character—but it’s another thing entirely to recall his voice.) And every once in a while, films strike a sartorial chord so great that it shifts entire cultures. Looks that define a decade of fashion choices, characters whose outfits become the building blocks upon which the world creates its wardrobe; these are the legacies of films that truly influence the style world. It’s no small matter, and one that is highly coveted within the fashion realm. 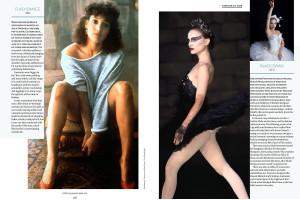 Take Giorgio Armani, for example. The Italian designer has crafted costumes for over 200 award-winning films, and while the fashion house celebrates a milestone anniversary this year—40 years—in the mid-70s, Armani was still on the cusp of fame. The Italian designer caught his big break in 1980 after crafting all of Richard Gere’s costumes for American Gigolo, and greatly influencing the styles of the era.

The fashion from that film then went on to inspire Jessica Chastain’s character’s wardrobe in the 2014 box-office hit A Most Violent Year. Again, Armani was pleased to ink a deal to design all of the actress’ costumes. Each garment, from the perfectly tailored power suits crafted from crisp linen textiles to figure-hugging gowns and structured overcoats belted at the waist, assisted in the articulation of Chastain’s character, Anna Morales, a sophisticated woman and wife of New York City business man Abel Morales (Oscar Isaac).

The fashion designer-and-actress relationship is extensive. Catherine Deneuve captured the attention of Yves Saint Laurent in 1966 and the pair played off of each other’s talent right up until Saint Laurent’s death in 2008.

In the 1967 French drama Belle de Jour, Saint Laurent crafted many of Deneuve’s costumes, helping to bring to life the story of a sexually unsatisfied housewife-turned-call girl. Minimalist dresses and wool coats with clean lines flawlessly reflected Deneuve’s character, and again influenced the fashion of the times. Today, the partnership lives on in the name of one of the brand’s most popular items, the Belle de Jour clutch.

It’s this ability to interpret a personality or a story or a feeling and transform it into a single garment that has kept an impressive roster of design icons at the forefront of film. And as well as being a powerful storyteller within movies, fashion also makes for a compelling story in and of itself.

This year alone, a number of fashion-based films documenting the stories of infuential designers have been released—these days, fashion not only plays a supporting role on the silver screen; it’s also the star. In Dior and I, directed by Frédéric Tcheng, Raf Simons and his buzzing Paris atelier are captured by a crew who shed light on the intricacies and painstakingly long hours involved in bringing a collection to life. In a captivating narrative, the trials and tribulations behind each stitch and each snip are romanticized on film.

Fashion greats are also moving from their ateliers to behind the camera. Ten years ago, designer Tom Ford launched Fade to Black, a film production company, and in 2009, he made his directorial debut in A Single Man. The drama starred Colin Firth and Julianne Moore, both of whom were nominated for Golden Globe awards. (Firth was also nominated for an Academy Award and Screen Actors Guild Award.)

It’s a symbiotic relationship that has been growing and evolving for a century, between fashion and film—we’ve come a long way because of it. Regardless of where lm is headed, it will certainly continue to use fashion along the way. And wherever we end up, there will always be great characters wearing really smart clothes.

BREAKFAST AT TIFFANY’S, 1961
A conversation about fashion and film wouldn’t be complete without mention of Hubert de Givenchy and the woman who appeared on the silver screen in many of his creations: Audrey Hepburn.The instantaneous bond of these two creatives saw life on screen influence copious trends for women’s real lives at home.

Their relationship, which began with the purchase of a capsule collection from the talented Italian designer for Hepburn’s role in the 1954 romantic comedy, Sabrina, developed into a decades-long collaboration of sketches, one-off dresses and trend- setting look after look. The most iconic outfit of all time—and one that hasn’t waned in 55 years—is the little black dress, which the brunette beauty wore in the opening scene of Breakfast At Tiffany’s. Inky satin hugged Hepburn’s feminine curves in all the right places, and the back of the dress’ straps, which commonly go unnoticed, were elegantly cinched in the centre to show off her slender shoulders. While Givenchy’s design didn’t actually make it into the film (lead costume designer on the fick, Edith Head, reworked the dress using Givenchy’s as a template), the original gown sold at Christie’s auction for over $900,000 in 2006.

After Hepburn’s passing in 1993, Givenchy would describe their relationship as a “kind of marriage.” This October, he remembers Hepburn’s legacy by dedicating his latest book, To Audrey With Love, a collection of sketches he created this past year during a brief stint in hospital.

FLASHDANCE, 1983
When Jennifer Beals appeared on screen as Alex Owens in the 1983 pop classic Flashdance, it prompted a generation of young women to take scissors to their closets and cut the collars out of their sweatshirts. The oversized, collarless pullovers Beals wore, effortlessly hanging from her dancer’s frame (with just the right amount of one shoulder exposed), defined cool for a generation of sportswear-embracing fashionistas.

Garments were bigger in the ’80s, with more padding and more width, and the image of a curly-haired woman in a headband, with the slouchy sweatshirt, pointy-toed pumps and leggings is, in many ways, the epitome of that time in fashion.
It was a statement look that only a film about a Pittsburgh woman torn between her jobs as an overall-wearing welder and a leotard-sporting exotic dancer (and her dream job of attending ballet school) could pull off. And it was one that connected with the youth of the time, much like the film’s chart-topping soundtrack.

Portman’s raw performance won her a Golden Globe and an Oscar, and the fashion realm took note. The following season, Karl Lagerfeld sent feminine skirts crafted from layers of frothy black tulle down Chanel’s spring 2011 ready-to-wear runway and gave a nod to Portman’s arresting on-screen makeup look by smudging charcoal-coloured eye shadow across the lids of each of his models.

That same season, Sarah Burton presented her inaugural collection for Alexander McQueen, showcasing costume-like creations dominated by swaths of delicate fabric in black, red and blush pink, textural elements of sensual lace and tutu-like skirts, all of which McQueen surely would’ve approved of.

There was also an influx of accessories adorned with silky feathers and tulle embellishments. Footwear designers like Manolo Blahnik and Christian Louboutin each created pairs of sky-high heels that clearly acknowledged Black Swan as the best ballet movie in decades.

Wearing Sportswears on the Street