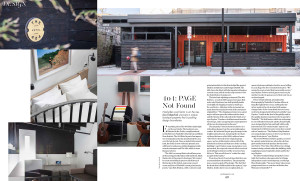 Everything about The 404 Hotel ranks high on the cool charts. The location is one. Situated in the Gulch, a neighbourhood nestled between Nashville’s Downtown and Music Row districts, The 404 is part of an impressive revitalization that has transformed the area over the last decade. Once an industrial no man’s land, the Gulch is now a vibrant, dynamic area with luxury residences, stylish shopping, locally owned restaurants.

“The 404 is a concept that evolved from years of discussing potential ideas with my friend, Mark Banks, who is the project’s developer. We wanted to create something to preserve the history of Station Inn in the Gulch—[an iconic concert venue and] one of Nashville’s most prized music jewels,” says Nick Dryden, a 404 co-investor and principal architect at the firm behind the project, Dryden Architecture and Design (DAAD). The 404 shares the block with the legendary bluegrass concert venue, which was the only reason to visit the Gulch before its makeover.

The hotel and adjoining restaurant (The 404 Kitchen—a modest 1000-square-foot space that seats only 50 patrons) are built partially inside of a bright red shipping container, which ups the cool factor—tabletops in the restaurant are made from the reclaimed wood of the container’s original floor. “The shipping container was a great way to add new space that addressed the street and the history of the rail yard in the Gulch area,” says Dryden. “It makes a bold statement from the streetscape, and is an appropriate counterpoint to all the new developments in the area.”

The property’s low, horizontal exterior is a refreshing change from the surrounding glass condos. Its industrial façade pays homage to the neighbourhood’s past, including the mechanical shop that once called 404’s address home. “The hotel is housed in the original garage space, and we deliberately retained all of the industrial architectural features of the existing building,” says Dryden. Large steel girders were untouched, the exposed concrete block received no finishing treatment and the wood roof was left as is. This was all done to “retain the original grit of the Gulch.”

From street level, it’s not obvious that there are accommodations situated here. The anonymity was a conscious part of the design. “The fact that the front door is hidden adds to the mystery,” says Dryden. Inside, there is no reception desk, no queue of patrons waiting to check in, nor a bellboy to carry bags. The five-room hotel is keyless. “We wanted to create a hotel that has invisible service,” says Dryden. Prior to arrival, guests receive a pin number in order to gain access to their suite via an on-door keypad.

Décor is kept minimal, yet purposeful. Photography by Nashville’s Caroline Allison is hung throughout the rooms, and bespoke furniture made in the city is mixed with unique vintage finds. “A five-room hotel deserves every inch to be designed and fabricated carefully,” says Dryden. “It adds to the level of hospitality and to the quality of patron experience that is special to Nashville.” The bed frames, which are an homage to one of Dryden’s favourite artists, Donald Judd, were designed by his firm and built with locally harvested ash. The “made locally” aspect is an integral part of 404, but some rooms have a small ode to Canada, too. “The Hudson’s Bay blankets are campy design classics; we love to use them in many of our spaces,” says Dryden.

The roof of 404 has a kitchen garden, accessed by a private spiral staircase, where the chef can grow and harvest fresh produce for the restaurant below. “Over time, this will become a design feature to help cool and soften the building, while supplying seasonal vegetables, fruits and herbs,” says Dryden.

The ultra-trendy boutique property is essentially for travellers who appreciate two things: independence and a contemporary, cool design. Plus, Dryden adds, “You never know who you are going to meet here or next door at Station Inn. Welcome to Nashville!”